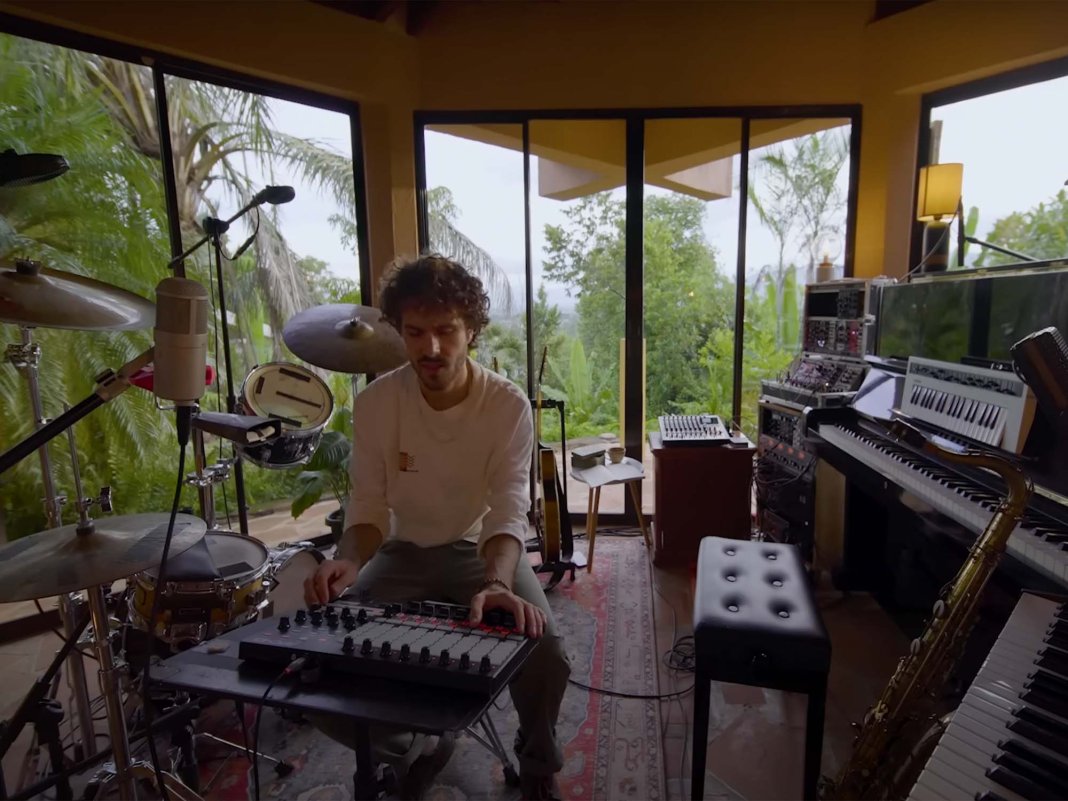 The set list hosts tracks such as New Life and Ylang Ylang and sees FKJ clambering from piano to his Akai APC40 MKII, to a Yamaha Reface CS, then over to guitar and more, providing 17 minutes of lusciously layered grooves and beats.

Viewers in the comments on YouTube expressed their joy at more people discovering FKJ through the set and noted a background appearance from his wife and fellow musician ((( O ))), and their baby twirling along to his performance outside the studio window.

You can watch the wholesome performance below:

In an interview with GQ, FKJ spoke of how he ties his use of modern technology with his soulful groove stating, “I’m really passionate about both – about composition as well as the more technical sound design. I don’t see myself running out of ideas, because there’s just too much, with these two things combined, that can be done. It’s infinite. Sound design is a h*** of an inspiration.”

He also spoke of how moving from Paris to the Philippines shifted his craft to leaning into creating soundscapes inspired by nature rather than the chaos of city life, “I’m making a soundtrack for an environment that is very different. It’s nature, and it’s contemplation, it’s calm, it’s magic and beauty.”

To catch FKJ performing live, you can get tickets to see him here.

Published on 27th July 2022 in Community

American musician Tycho has announced he will contribute a mix for the Back To Mine release series, featuring tracks by Slowdive, Tourist, Luke Abbott and more. The artist has also unveiled Tycho Open Source, purportedly the first-ever web3-based music fan community....

The strategy of creating music inspired by a particular concept is increasingly becoming difficult to market. Does this mean the death of the music Album? Not necessarily. Through innovative music marketing, concept albums will continue to make an impact on listeners. Thus, each song of the alb...

The need to create

Do creative people choose to create, or do they need to create? I have been asking this question of myself recently, although subconsciously I have probably always been asking it. I have recently taken up listening to podcasts lately at work to get me through the work day. I have grown bored of list...

Bogotá, D.C., Colombia, February 22, 2019 – DARKNESS, legendary Colombian rock metal group announces a new launch for June 21, after two years of inactivity. This new production was recorded on December 21, 2018, produced by Flemming Rasmussen (Producer of Metallica during the 80’s) and...

‘Whiffing the Peaches’ are an experimental Rock/Funk/Soul trio from North East Lincolnshire, UK. The trio was formed by three members of Grimsby Covers band, ‘Skip of Fools’ who wanted to write and perform their own ideas. WTP is NOT a gigging project. Briefly, the band consi...

“The Politics of Digital Marketing in the Music Business”

With every new technological development which enhances music makers’ abilities to take ownership of their career via the DIY approach, the prevalent belief that the destiny of an artist’s success is in one’s own hands gains wider ground. Without a doubt, the tools given to music artists t...

Good day.  I am a musician living in Austin, Texas and I wanted to introduce myself with a song called “The Lover’s Eye” from my newest album that came out last year.  The name of the album is PHOENIX and you can find it by checking out this link here. I will also provide the......

The Acoustic Beauty ( This is korie )

`This is Korie`​ Showcase Acoustic Beauty Through It’s Melodies and Lyrics How are you enjoying the warm spring weather? We might not be able to enjoy it this year the way we had in the past. Yet, we can still enjoy the spring weather by cracking the window or looking at the flowers blooming nea...

THE TALES OF RICKY THE ROOSTER

THE TALES OF RICKY THE ROOSTER [aka my right hand hen]     In a past life before being a public street performer…  I was a public… street… performer. hmmm? except my act was different: and the star of the show was one – my lifelong pet& best friend, Ricky. [pictured on...

This is a song about human emotion and the lack of control that we carry at times in its execution, thus leading us to make terrible mistakes that haunt us to this day.   This is my proudest work to date and if you like what you hear, then LIKE this song and then SHARE......